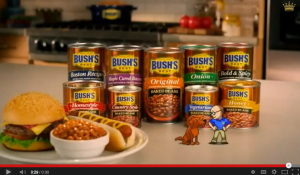 I was unwinding from a busy week and was watching a little TV, I came across an interesting commercial that fell in line with some of our course studies.   The commercial was for Bush’s baked beans.  I’m not sure how many of you have seen it but it was very interesting to me because they combined the communication message of the commercial as well as promoting a mobile game that users can download onto their phones.  At first I thought it was just a marketing campaign because who would really want to play a video game based around baked beans but at the end of the commercial they even promote it further and encourage followers to download it.

This got me thinking, I can’t recall when I’ve seen another commercial promote their mobile app and encourage users to download these advergames.  What this says to me is that this is a perfect example of how marketing is changing and how brands are really trying to reach their consumers through various platforms.  The days of just TV commercials or radio advertisements is over.  Today we have social media, advergames, mobile marketing, etc.

For those of you who don’t know what advergaming is, let me explain– advergaming is the use of video games to advertise a product, organization or view point.  In other words, using it more as a promotional tool hidden within a game instead of games of the past that were created to truly just be a game.  Examples of advergaming can be seen my brands utilizing product placement, advertising in games that are downloaded for free, etc.  This actually got me thinking to when I was younger the teenage mutant ninja turtles video games would have Pizza Hut pizza in them.  Who would have thought that advergaming existed decades ago.

Smart phone technology, of course, has made advergaming more accessible to consumers through mobile marketing.  It is not mystery that we have our phones on us at all times.  This makes the ability for companies to be able to communicate to us literally be 24 hours a day, 7 days a week.  The benefits of advergaming on a mobile platform is different than traditional advertisements.  Traditional advertisements on buses or billboards can not be targeted to a specific group.  However these apps can be targeted towards people who would but certain products.  For example, the person who would most likely be downloading Bush’s baked beans free advergame is probably someone who enjoys Bush’s baked beans.  Even if that is not the case and a child asked to download this free app on their parents phone it is still additional advertising for them.  Every time the parent looks through their phone they see the companies logo and advertisement.  It is putting the brand in a place of constant reminder and in turn will hopefully make their interest in the brand grow.

I decided to take a look on Bush’s Facebook page to see if they were promoting there game app on social media as well as on their commercials and of course they were.  This proves that Bush’s understands the power of using all these media platforms to make the most of all of their marketing efforts.  That’s is the true power of emerging media.